If you stop at the light on the corner of 4th Avenue and 8th Street in downtown Huntington, you will see that “Hope is Everywhere.” 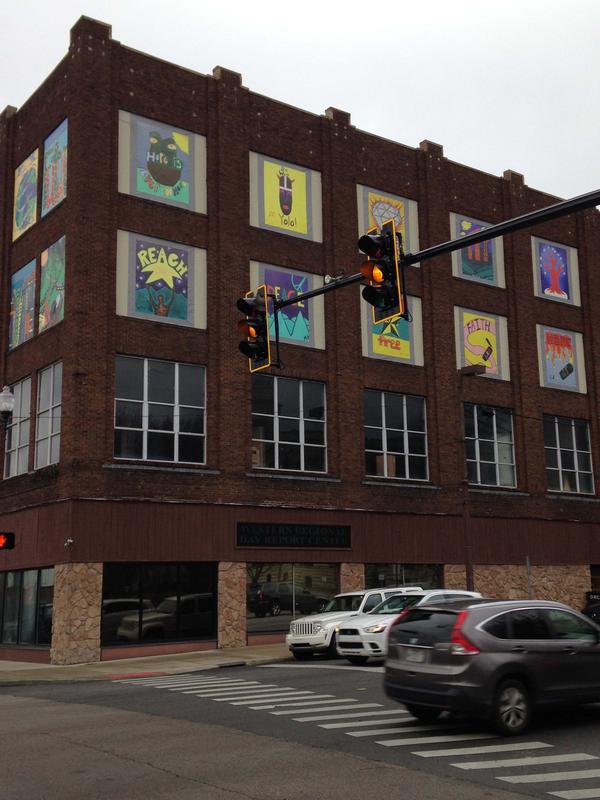 OK, maybe not everywhere, but at least in the colorful window murals on the building across from the Cabell County Courthouse.

The 2004 ArtWorks project called “Windows,” recently got an upgrade as the Huntington Museum of Art and students from Pressley Ridge in Ona painted 10 fresh murals on the second and third floors of the building that houses the Western Regional Day Report Center.

With themes of freedom and hope and faith and YOLO (You Only Live Once), the new project replaced half of the original murals, including all of the ones on the western side of the building that takes the brunt of the incoming wind and rain.

Katherine Cox, education director at the Huntington Museum of Art, said the late fall installment was the first part of a two-part plan to replace the original public art project that was a collaboration between the Museum (with guidance by West Virginia State College assistant art professor Sabina Haque) and kids from the Cabell County Youth Empowerment Program.

Cox said WVSU professor Molly Erlandson headed up the project last winter in which 10 middle and high school-aged boys from Pressley Ridge came up with a theme for the replacement Windows and then got to work painting new panels.

Like the original project, which was hung by Paris Signs, the Museum got an even further assist from that company as Paris Signs installed the new panels and took the finished 24-x-36-inch paintings, printed them on vinyl and stretched them over the original wood panels placed in the windows.

“One of the things that we included was a trip to Paris Signs because we wanted the boys to have some sense of future possibilities and to see the process through,” Cox said. “They really have some amazing equipment and a huge facility.”

Cox said the second half of the Windows upgrade will start on Jan. 24, and end up on March 28 with Kris Plona, a teacher at Winfield High School, and someone who used to work weekends at Pressley Ridge, a home for troubled teen students.

“This winter we are going to do the 4th Avenue side and it’s pretty much the same structure, and we’ll have 10 kids working on the project,” Cox said. “The other thing we try to do is to have some side projects so we have Kathleen (Kneafsey, the museum’s artist in residence) working with them for half a day to give them some more experiences and to let them have more opportunities for success to build their self confidence a little bit.”

The project, which got some funding from the LaFon Family Foundation, is the latest in a long line of ArtWorks projects that number over two dozen and that include several national award-winning public art projects.

Although some projects have encompassed performance art of many varieties, many ArtWorks project have been public art project including the last one “Walk in the Park,” a project between the youth of Pressley Ridge guided by Kneafsey. That clay-based ArtWorks project is visible in the west end of Ritter Park (across from the old Olympic pool).

Some of the other artwork created since ArtWorks began in 2000 include “The Circle of Life” on an outside wall at HMA, “Building Blocks,” at the foot of the Robert C. Byrd Bridge. That towering steel sculpture built with the assistance of Jonathan Cox, received a National Award of Merit from the National Association of Housing and Redevelopment for HMA, the Huntington Housing Authority and the city of Huntington.

“ArtWorks projects are into the 20s now and there is a huge variety,” Cox said. “There’s the one in the Huntington Bank lobby, and one of my favorites was a bit different, students learned to cook and learned pottery and weaving and dancing and they did a program and gave their talents to another group of people. It’s been an interesting program because they are here for eight Saturdays from 10 to 3 and we don’t know where they go after they finish. But it’s like the woman who contacted us to see if her sculpture here at the museum was still here, and who was like, ‘I have children now that I teach art to and it was the most amazing experience and it changed my life.’ You just don’t know the effect of art making experiences with kids, working with their hands and seeing them have success and helping them showcase their work, and having a role model to be with for eight Saturdays.”