Can tempered glass be safer for fire mitigation?

On Saturday June 23, 2012, a jogger in the Waldo Canyon area around 7 a.m. smelled smoke. The jogger was one of the first to encounter the active fire – about 100 feet by 100 feet in size, and growing as it smoldered through dry fuel. As soon as the jogger got cell phone reception about 45 minutes later, he called authorities. Unfortunately, the man’s name, number and exact location went unrecorded by dispatch, and the sheriff’s office and fire investigators did not know about the call until days later. The dispatcher had been briefed about the June 22 smoke investigation – dubbed the Pyramid Mountain Fire – and assumed that all smoke-related calls fit under that umbrella. ‘Pueblo Forest Service checked on that last night. They said they would be sending up another unit first thing this morning to check on it, but they are aware of it and they will be up there shortly this morning,’ the dispatcher told the jogger before hanging up. It is likely that the jogger and the fire crews were in the forest at the same time. But the jogger had found something the crews had not: actual fire… 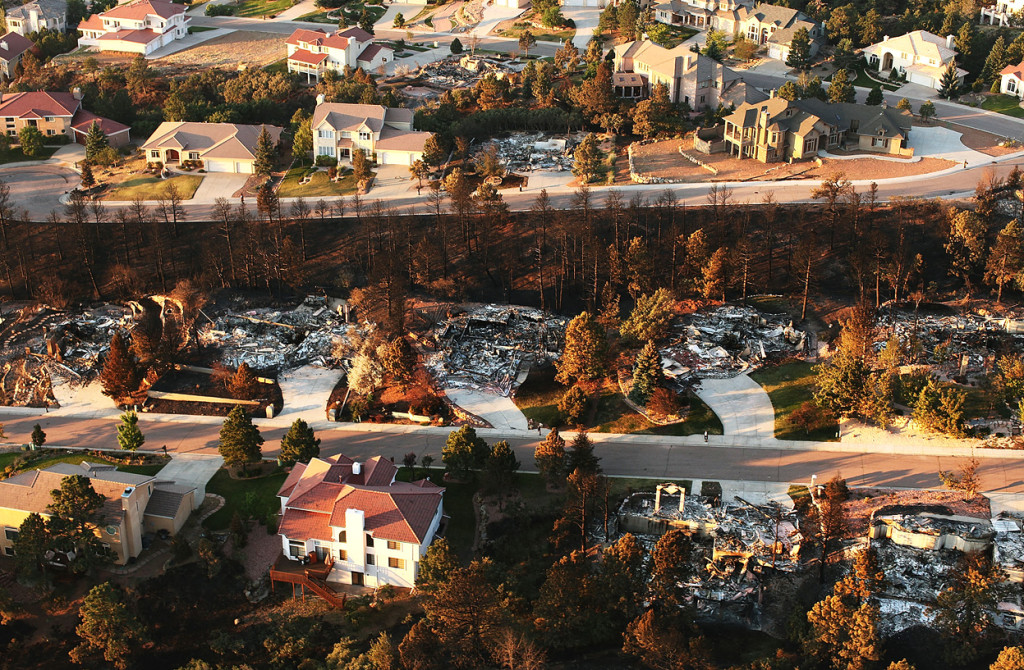 There is not much you can do in a fire like the Waldo Canyon Fire. At least there is some alternatives for your home when it comes to windows and fire mitigation. If windows break, the fire will easily enter the house. This can happen under the barrage of flying embers and debris, which typically rain down on the Window broken as a result of a wildfire area surrounding a fire. Glass may also break when it’s subjected to extreme heat as the wildfire nears; the visible glass heats and expands faster than the portion protected by the window pane, which will cause small, growing cracks to form at the edges of the window. Also, if the window frame ignites, the fire can quickly spread to the interior of the building. Prevent this outcome in the following ways:

Install dual-pane windows. The outer pane will protect the inner pane, allowing it to adjust more gradually and uniformly to the heat, minimizing the chance that it will crack.

Install tempered glass. While more expensive than standard, annealed glass, tempered glass resists extreme heat better than its alternatives. Tempered glass can be identified by a small etching in a corner of the pane.

Install insect screens. Under exposure to radiant heat, insect screens act as heat shields. Bronze screens are more effective than aluminum screens. However, none will significantly protect against flame impingement.

Create a custom cover for the window that may be installed quickly prior to evacuation. Windows may also be equipped with roll-down shutters.
Clean vegetation and flammable debris from the windowsill.

Replace decayed wood around the window, as it will ignite at a lower temperature than sound wood.

During fire season the little things may be the most important.