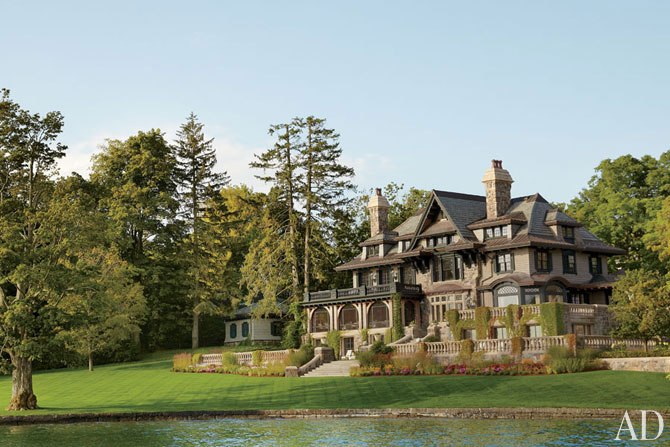 Shah Jahan, the 17th-century Moghul emperor, dedicated the Taj Mahal to the memory of his chief consort, Mumtaz Mahal. Louis XV funded myriad cha?teaus to delight Madame de Pompadour. As for recycling entrepreneur Adam Weitsman, when it came to paying tribute to his wife, Kim—“I had no financial success before I met her,” he says—nothing would do but a weekend getaway on their beloved Skaneateles Lake, a ribbon of water in the Finger Lakes region of upstate New York. And not just any bucolic retreat, but a full-throated salute to the resort area’s Victorian heyday.

The postcard town of Skaneateles, which has been a popular summer destination since the early 19th century, became peppered with grand cottages after the Civil War, one of them the work of Gilded Age tastemaker Stanford White. It was Weitsman’s appreciation of those stately residences and their comfortingly traditional architectural vocabulary of cedar shingles and portly turrets that led him to call architect John I. Meyer Jr., principal of the Boston firm Meyer and Meyer Architecture and Interiors, six years ago, after studying his online portfolio of picturesque country residences.

Weitsman wanted to gut a blocky 1902 house he had recently acquired and rebuild it in a more distinguished style. He also bought two neighboring parcels of land (one with a dwelling he intended to demolish) to give the lakefront home appropriately estatelike grounds. Though Weitsman grew up in Owego, about an hour south of Skaneateles, and now lives primarily in Vestal, near the New York-Pennsylvania border, the Finger Lakes town has entranced him since childhood. As a youth he spent countless hours scouring regional shops for 19th-century American cobalt-decorated stoneware, amassing a stunning crockery collection that he eventually donated to the New York State Museum in Albany. While still in his 20s, Weitsman also opened the American Folk Art Gallery, a widely respected Greenwich Village shop (now defunct).
“It’s a pretty lake, a small town, and the people are friendly,” says the soft-spoken owner of Upstate Shredding-Weitsman Recycling, a scrap-metal processing company that he founded in 1996 at the age of 28 and built into one of North America’s largest; Kim, a former model, is an operations manager at the firm. The couple, well-regarded philanthropists who have a young daughter named Clover, were eager for their new home to bring something to the community as well. “I wanted to hire local craftsmen to support the town,” the businessman says.

The renovated Weitsman residence has a remarkably discreet street presence for a four-story stone-and-shingle schloss encompassing some 14,000 square feet. Sheltered beneath a vibrantly gabled slate roof, the home has the same footprint as the original, but the amount of living space was dramatically expanded after the interior was reconfigured. Neighborhood concerns over the scale of the project led to the restrained scheme for the primary elevation, which now presents a friendly Arts and Crafts appearance (high central peak, curved timbers) that fits neatly with the modest late-Victorian architecture of the region. The rear fac?ade, on the other hand, has an exuberance straight out of the 1890s, from the magnificent bow window framed in pale limestone to the sweeping flights of stairs that separate two balustraded terraces (one stone, one grass) on their way to the lawn below and the lake beyond. “In the beginning I wanted to do something grander,” says Weitsman, an admirer of the Beaux Arts mansions of Newport, Rhode Island. “But John’s team came up with a design that felt right with the historic nature of Skaneateles.”
Inside the house, what had been dark is now light, thanks to Ray Booth, Liz Thompson, and Peter Fleming of McAlpine Booth and Ferrier Interiors, a firm with offices in New York, Atlanta, and Nashville, Tennessee. “The strength of the exterior wouldn’t tolerate any little French objects dropped in,” says Booth, who directed the decoration as well as the rooms’ architectural details, among them the bold S-curve walnut newel posts for the staircases and the living room’s exquisite paneled wainscot and plasterwork ceiling. “Everything had to have gusto,” the designer adds. “We don’t tend to go as formal as we did here, but the clients pushed us to shop for the best we could find.”