Windows Can Help Make a House Hushed and Healthy 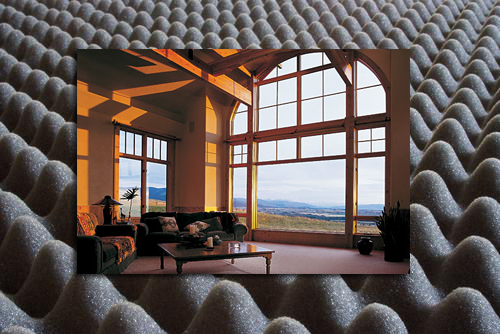 The Burlington Northern train runs through Ft. Collins, Colo., 10 times a day, and architect Pete Weber designed a mixed-use project right next to its noisy tracks. On this project, Weber, creative director for Boulder, Colo.-based Coburn Development, speced Weather Shield’s Zo-e-shield 6 laminated windows to reduce the sound transmission. “You’re never going to block out a train,” Weber admits. “But it really takes the edge off.”

Sound-control windows are increasingly in demand for dwellings like Coburn’s in dense urban or suburban areas, manufacturers say, especially with space in and around cities at a premium and infill development on the rise. “As homes continue to be built closer together, as well as in areas infringing closer to freeways, there’s much more call for [sound-control windows],” says Dave Koester, brand manager for Weather Shield.

While VOCs and indoor air quality are often the first issues that come to mind for builders erecting healthier homes, noise control is increasingly considered a green building tenet. “Noise is an issue that touches everyone,” says Steve Weiss, vice president of marketing for manufacturer Quiet Solution. “People are having an increasing awareness with noise as an issue and wanting to deal with it more and more.”

Sound abatement also allows builders to develop previously undesirable land in noisy areas, to market their homes as ultra-quiet, and to sell them at a higher price. “We might have customers not used to an urban environment, or empty nesters very concerned about being able to sleep at night,” says Weber. “Being able to, in the literature, say what we’ve done to control sound” makes a big difference.

Builders also can develop closer to loud but job-rich city centers or noisy transportation hubs such as freeways and train stations, reducing commute times and gas costs—as well as pollution.

Most pros compare the sound transmission of windows using the Sound Transmission Coefficient (STC) scale. For every increase of 10 in the STC rating, the sound passing through the unit is halved; the higher the STC, the better the unit is at blocking sound.

The key to blocking sound transmission through a window is breaking up the sound waves, and manufacturers employ a variety of technologies to achieve that goal.

Many window makers have traditionally used standard impact-resistant laminated glass to reduce noise because the laminatepolyvinyl butyral (PVB) interlayer has a different density from the glass, breaking up the sound. A standard insulated window with one layer of laminated glass would have an STC of around 32 to 35, a significant improvement from a standard insulated window with an STC of about 29 or less.

Because the laminated layer requires an extra pane of glass, however, the sash is heavier, so the manufacturer must design the window with the proper hardware and operating capacity to handle the weight. And, depending on the product, laminated windows normally cost 10 percent to 50 percent more than their standard counterparts, though laminated windows without an impact rating are less expensive than impact-rated products.

Adding a storm panel or an additional monolithic pane to the window can help achieve STC ratings of 39 or higher. Sound needs air to move, so the 1/2; inches to 3 inches of dead air space between the primary and secondary window causes the noise to die, says Loren Sloane, director of product marketing for Atrium. The secondary window can change the aesthetics or operation of the unit, however, and can add to the total cost.

To address the challenges of existing sound abatement technologies, manufacturers are finding new techniques to block noise. Offset or dissimilar glass is a popular way to reduce sound transmission at a lower cost than laminated glass or storm panels. Many sound-control windows use different thicknesses and densities of material within an insulated glass unit, according to Sloane. “As the sound wave travels through the different types of materials, it’s broken into different frequencies,” he explains.

Because panes of different thickness break up sound better, windows with dissimilar glass can achieve STC ratings of 30 to 34 without laminate, and with a price premium as little as 3 percent to 20 percent. The technique also can be combined with other technologies to further improve the window’s sound abatement.

“A lot of times we’re more apt to offer different thicknesses of glass because it really isn’t that much more money,” says David Doremus, sales manager for Baltimore’s BGE Home.

The best-performing sound-control windows take a systems approach, incorporating features such as the spacers, gas fill, and framing that work in concert to block noise, adds Quiet Solution’s Weiss. Understanding how the parts of the window work together to block noise is important to achieve the top performance ratings, explains Ian Sullivan, vice president and general manager of window business for Quiet Solution. “It’s a combination of art and science to accomplish that.” — BUILDING PRODUCTS

Sound travels through a window in two ways: via air infiltration through the unit and through vibrations in the window’s physical components. So a window designed to reduce sound transmission can include several factors: weather-stripping to reduce air infiltration, a secondary component such as a storm window to create large dead air gaps so sound is less easily transmitted, and multiple panes of glass and other materials of varying thickness.

Those panes vibrate at a certain frequency, called the “critical frequency,” at which sound is transferred uninterrupted, according to Julie Schimmelpenningh, technical applications manager for Solutia, which manufactures Saflex interlayers. Each thickness of glass has a different critical frequency, so including multiple panes of different thicknesses acts like a sponge, dampening the sound. A typical dual-pane window has an STC of about 25 to 27, while a standard insulated wall has an STC of about 35 to 42, experts say. For the best sound control and value, pros should match the window’s STC to that of the wall as closely as possible.

Schimmelpenningh adds that while STC is “very much entrenched in the specifications,” pros can benefit from looking at other sound transmission measurements. The OITC, or Outside Inside Transmission Class, uses the same data as STC but at a lower frequency to mimic noise coming through the facade of a building. It is “probably more accurate,” she says, but the spread between STC and OITC for windows is usually the same.

She adds that pros and engineers are increasingly demanding transmission loss information in the 1,000- to 3,000-hertz frequency range—the frequencies at which glass transmits noise. Some windows might improve in STC by 1 or 2, she says, “but if you look at the frequency numbers, you see there’s a huge jump in that critical frequency range…. It’s an excellent trend that we’re starting to see people look at frequency numbers.”